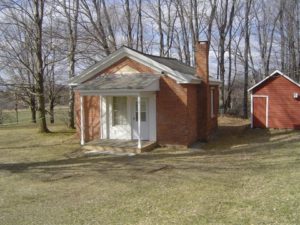 The School was built in 1847 and operated for 114 years as a classic example of the heart and soul of American education. Up until its closing in 1961 there were eight grades in the one room. The building was deeded by the Town to the Society on its formation in 1973, whereupon the Society upgraded the building for the cataloging and archiving of the Society’s collection. A further significant upgrade in parallel with the work on the Braintree School was made in 2008. 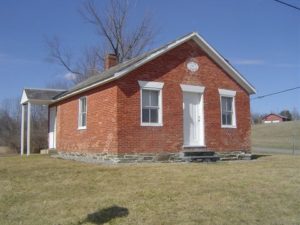 This District 8 red brick school was built in 1852 at 9 Warren Switch road in West Pawlet. Constructed of red brick, the building has a 22’ x 27’ footprint and replaced a wooden structure that had burned. It is located in a little settlement known as Braintree, which was named for New Braintree, MA, where its original settlers came from. It was a school for eight grades for 82 years, closing in 1934.

The school was a part of the Jack and Marjorie Jones’ family farmstead until 1973 when it was donated to the Pawlett Historical Society, following which the Society made a major refurbishment.

In a 2008 renovation, thanks to a grant from the Freeman Foundation and the Preservation Trust of Vermont, the floor was re-stained, the woodwork refinished and the walls and ceiling refinished with horsehair plaster as used in the original 1847 structure. The building is furnished with desk/chair units authentic to a later period, a stove, teacher’s slate board, and a map of the “United States of America” (1916). Periodic re-enactments of a colonial period school day have been held there.

Further details of the school’s structure and history, and a summary of the history of the education in Pawlet are available within the school. 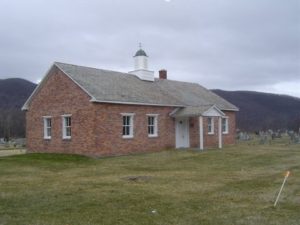 The chapel was originally built as one of Pawlet’s thirteen one room schoolhouses. In 1912, by which time there was no call for a schoolhouse in the cemetery, the town released its holdings to the Cemetery Association which then used it for tools’ storage. By 1953, when the building’s condition had significantly deteriorated, the Association conducted a significant reconstruction to provide a chapel of simple but attractive and appropriate design. It was dedicated in August 1961. Later, in 1977, it was renamed the “Chriss Monroe Chapel” in memory of Chriss Monroe, the longtime grounds-man for the Association. In 2015, after a two year search for expanded program, exhibition and archival storage space, the Society concluded that the chapel was the best option available and signed a Memorandum of Understanding with the Cemetery Association for its use for such purposes. The Society subsequently developed a plan to meet its needs, while leaving the auditorium usable as a chapel. With the support of a Vermont Arts Council grant this renovation was completed in the spring of 2016. A grand opening event was held on July 31, 2016 with many in attendance to view the building’s first exhibit:  Businesses of Pawlet and West Pawlet.

The map below shows the location of each facility. (Please zoom out on the bottom right of the map to view all three locations.)

Our monthly board meetings are usually held the second Thursday of the month.

All our events are free and open to the public.