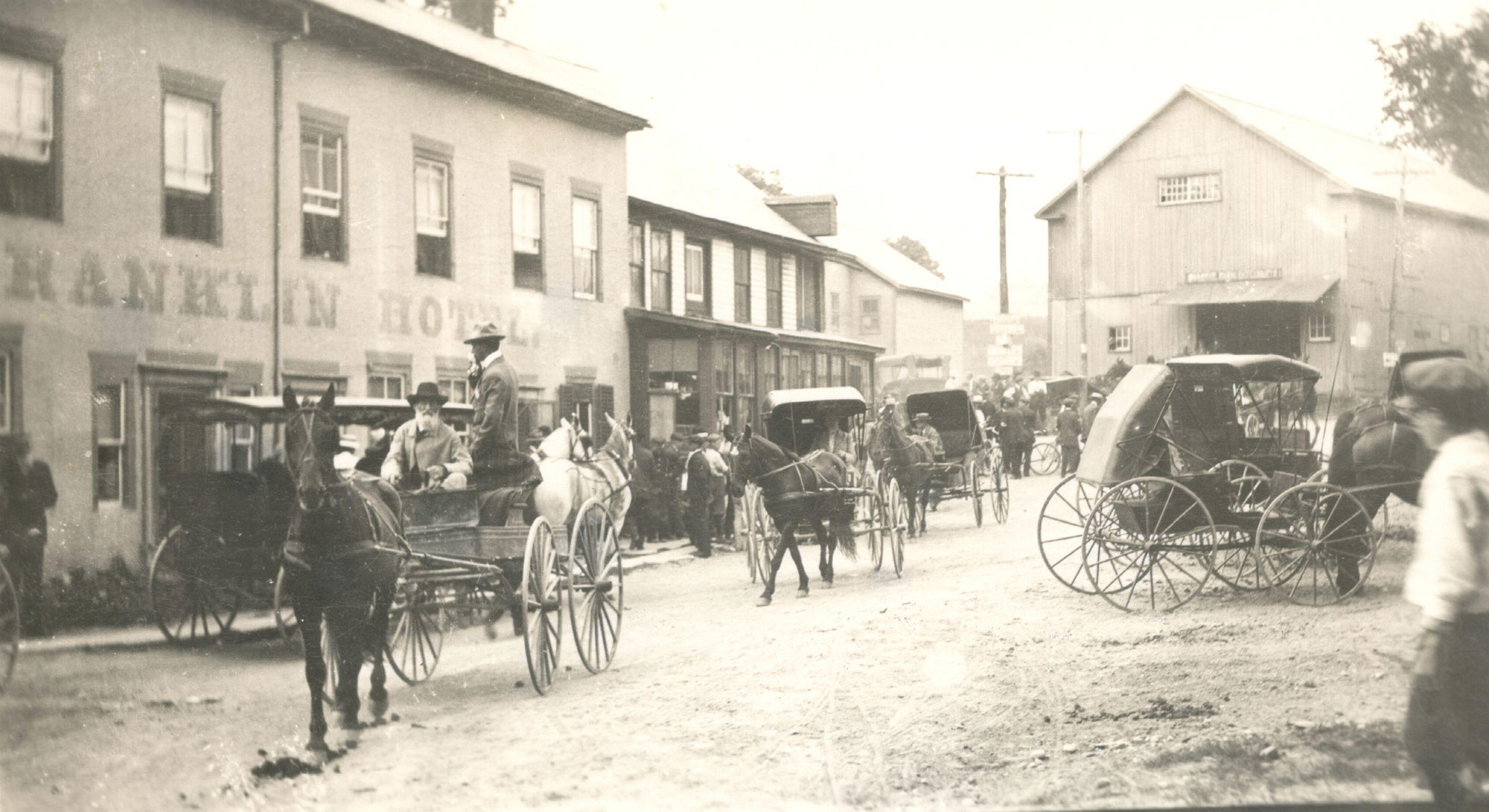 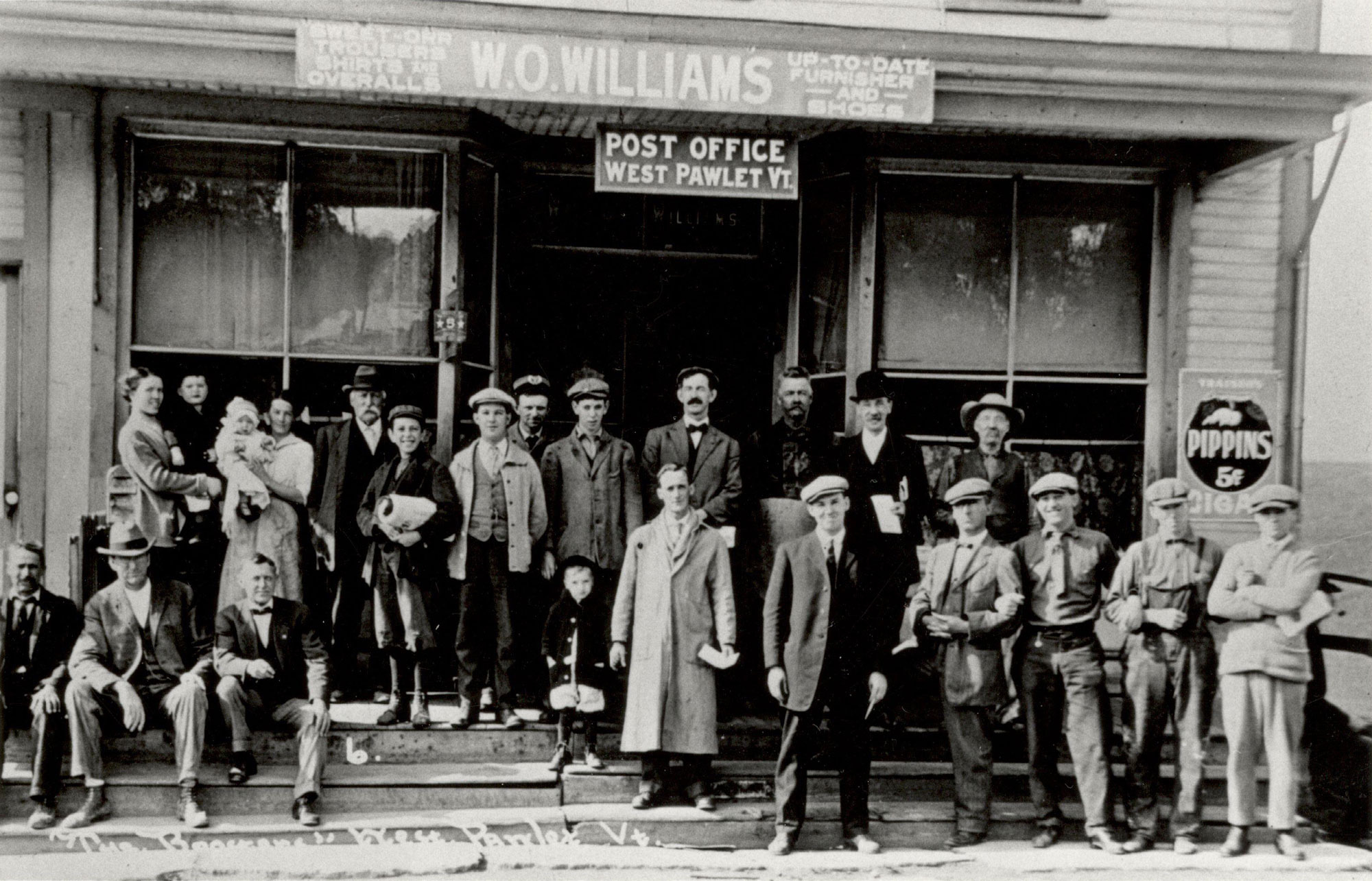 History of Pawlet, by John Malcolm

Pawlet is a town in southwest Vermont bordered by the towns of Wells to the north, Danby to the east, Rupert to the south, and the New York towns of Hebron and Granville to the west. Pawlet is roughly six miles square, with elevations from 630 feet to summits at 1850, 1919, and over 2030 feet for the tallest mountains. The northern end of the Taconic mountain range bisects Pawlet. The Town consists of two village centers, Pawlet and West Pawlet, separated by a distance of about 6 miles.

The town’s name reportedly came from either Charles Paulet, fifth duke of Bolton, or “Paulette,” a name previously associated with the area’s predominate river now called the Mettawee, which also runs north from Dorset through Rupert and Pawlet. Other important streams include Flower Brook in Pawlet and the Indian River in West Pawlet.

Pawlet was first chartered at the same time as 130 other Vermont towns by a grant from colonial Governor Benning Wentworth of New Hampshire on August 26, 1761. Jonathan Willard and 67 other shareholders were the first grantees, although very few ever lived in Pawlet. The first record of a meeting of the proprietors was in 1764, and the first settler is recorded as Dr. Simon Burton in 1768 in the area now called North Pawlet. Some of the first settlers were involved with the French and Indian War, and a hill in North Pawlet where a battle occurred continues to be called Indian Hill.

In 1777 during the Revolutionary War, Colonel Samuel Herrick and his Rangers and others set out from Pawlet to attack outposts of Fort Ticonderoga. Members of the Herrick family continue to reside in Pawlet, and a brook and a road in Pawlet share the Herrick name. Also in 1777 it is recorded that Pawlet’s Captain Ebenezer Allen freed two slaves captured from Burgoyne’s British forces when they were retreating from Ticonderoga, in the same year slavery was prohibited in Vermont’s new constitution.

Pawlet’s early years were dominated by forestry, land clearing, and farming the productive soil of the Mettowee Valley. Incredibly as the land was cleared, many miles of stone walls were built even up the highest mountains. The land was grazed with sheep and cattle.

Several water-powered mills were built as early as 1768 to harness the abundant water resources and process grain, lumber and other wood products, and textiles. Pawlet’s population soon peaked in 1810 at 2233 people as it became an industrial center. Mr. Consider Bardwell from West Pawlet was a notable inventor and manufacturer of tools needed by the many industries in the 19th century, and in 1864 he also established the first cheese factory in Vermont. Joshua Stoddard of Pawlet was another inventor who received a patent in 1855 for his steam piano he called a calliope. Stoddard also developed hay rakes, fire escapes and fruit paring machines.

With the building of the Rutland and Washington Railroad in 1851 through Rupert, West Pawlet and Granville, N.Y., many quarries were opened to mine the prolific slate in the area which was processed into slate roofing shingles, flagging and other products. This development soon attracted many immigrants familiar with the industry from Wales and Italy and other distant areas to work in the over 100 quarries and processing sheds. The railroad enabled other area industries, cheese and butter makers, and potato growers to ship their products to distant markets, such as Boston and New York City.

The Civil War did not leave Pawlet untouched. A Pawlet native, Marcellus Jones, was recorded as firing the first shot to start the pivotal Battle of Gettysburg on July 1,1863. After the Civil War, many Vermonters moved out to the expanding American West for stone-free soil and new opportunities. The wool and sheep markets collapsed.

After the Civil War years, dairy farmers started to dominate the landscape. Numerous farms became established in the valleys and up on the hills, and the heavy cans of milk were transported by rail to far markets with burgeoning populations. Several dairy farms exist in Pawlet today, some in their 7th generation and many times larger, up to 500 cows, than those of the late 1800’s. The building of the large Crescent Valley House in Pawlet in 1884 was part of the trend for city dwellers to escape the summer heat and poor quality air and vacation in the country. In 1900 telephone service came to the area, followed by electricity and paved roads in the 1940’s. Maple syrup is another important commodity that has been produced in Pawlet consistently over the years.

Pawlet’s population reached its low point in the 1960 census at 1,112 but quickly rebounded as many tourists, attracted to Vermont for skiing, hiking, open spaces and new opportunities, decided to relocate or have a second home in the area. Significant work opportunities opened up in residential construction and home maintenance, and many people became contractors, carpenters, masons, plumbers instead of succeeding their fathers and mothers in the factories of their day. At the same time, many of Pawlet’s farm families have conserved their farms from development, and new agriculture ventures are on the rise, from raising goats and producing cheese to growing sweet potatoes and grape vineyard root stock. The advent of the Internet has facilitated many new possibilities of local enterprises and small businesses, and the Town’s population of artists and crafts people remains stable.

Pawlet is proud of its history and optimistic about its future. It is home to a community school with Rupert and host to a local community health center. The slate and dairy industries continue with their ups and downs, but the landscape endures and the energy of the people who live and work in Pawlet shape its present and beyond.

Our monthly board meetings are usually held the second Thursday of the month.

The next monthly meeting  of the PHS Board will be –Thursday, December 8 @ 7PM via Zoom

All our events are free and open to the public.